The West House garden has been a very special place for me during my Brown career and has provided me with an identity and a home. I came to Brown from the suburbs of Chicago where I grew up in a farmhouse with 6 acres and a large garden. Thus, I had never lived in a city before and was nervous about my move to the urban Brown campus in Providence. In my freshman year at Brown, I struggled to find my place given that I lived in a large dorm without a garden to call my own for the first time in my life. I heard about West House and knew instantly that was where I needed to be. Luckily, I applied got in off the wait-list and looked forward to being a resident and gardener the next school year.

The next fall, I couldn’t wait to start working on the garden and installing the projects I had been dreaming about over the summer. I took over the gardener house job and inherited a garden that didn’t quite match my high gardening standards that I had built up over the course of the past ten years. There was a jungle of plants in the raised bed and a patchwork of weeds and exposed dirt in the rest of the small backyard lot. A deteriorated small compost bin made of rust fencing and decomposed palate wood sat in the back corner. I knew I had my work cut out for me but was happy to have a piece of land to work on and provide me with an outlet from my schoolwork.

My first project was to build a new three-bin composting system. The system was such a success that I decided to collect food waste from outside West House as well. I am a part of SCRAP, Brown’s Student Compost Initiative, and together we have given out over a hundred one-gallon buckets to students so they can collect their own food scrap and bring it to the compost system. I manage the system by mixing the food waste along with brown material, such as dead leaves, in order to make black, nutrient-rich compost to add back into the garden.

I have fine-tuned my composting method over the years since I first experimented with composting as a child. Composting then seemed to me like magic and I quickly grew in awe of the whole process. I could take rotten food waste that normally would go into the garbage and instead turn it into perfect soil that could be added back to the garden to turn once again back into food. The concept of a zero-waste cycle where the waste from one process could be converted back into a natural resource seemed so intuitive and smart that I began to wonder all systems in our society weren’t designed the same way. These beliefs led me to consider why our energy system has to be so inefficient and produce so much waste in the form of pollution, and why it could not be based around zero-waste, renewable systems. Thus, from an early age I discovered that I wanted to become an engineer to work on renewable energy, and having the West House garden as a college student has given me an outlet and a place to study zero-waste cycles while implementing some of my engineering skills.

While to many the West House garden may seem like just a small patch of land behind a building in Providence, personally it has been one of the key parts of building my Brown experience. After building the new compost system, I grew a patch of winter rye, laid down mulch, and brought in a new table. This led to many more of my housemates utilizing the garden and only strengthened the West House community in which I have made some of my closest friends at Brown. Thus, West House and the garden have been home to me and I doubt I would be the person I am now without them. As a summary of my thoughts, I would like to end with a quote from Mohandas Gandhi:

“To forget how to dig the earth and to tend the soil is to forget ourselves.” 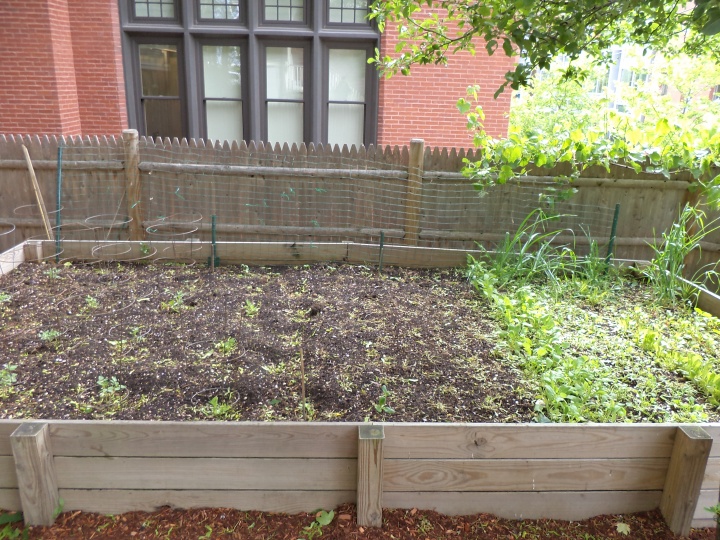